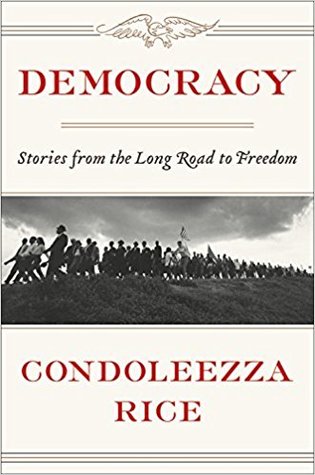 Democracy: Stories from the Long Road to Freedom

At first glance, this actually looks like it would be a really boring book. It’s written by a politician; it’s long; and it’s a nonfiction book about democracy. Yet, after seeing a segment on the PBS News Hour about it, I was curious and decided to give it a go.

Condoleezza Rice has written several books before, so this ain’t her first rodeo. “Democracy” is her latest. Each chapter of the book is about a different country and how it achieved democracy, or in most cases, quasi-democracy. She goes into great detail about how countries like Russia, Poland, Ukraine, Colombia, Kenya, and others went to great lengths to accomplish a fair and just government. Unfortunately, most are still working on that goal.

What I liked about this book was that Rice gives an unbiased view of each nation. She acknowledges that all people want the same thing: to have basic human rights and to live in a free society. Each of the countries described in the book struggle to get to democracy in different ways. Rice mentions how the US, and then president Bush, aided these countries whenever possible, which gave me a newfound respect for Bush.

One highlight of the book I feel I must mention is when Rice describes her meeting with former Libyan president Muammar Gaddafi. She writes about how she was in a room with him and his female body guard (who is rumored to actually be his daughter). He showed her a video he created of images of Rice set to music. He then describes her as the black flower of the white house! Needless to say, she was creeped out!

The book is definitely worth a read for anyone interested in world politics or just government in general. It’s an eye-opening view on just how difficult it can be to obtain democracy while facing extreme challenges.